Learning to be in the moment 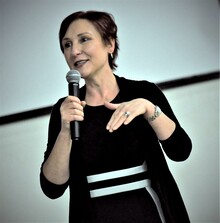 Two common causes of mental anguish and personal suffering involve dwelling on past traumas and – in the case of anxiety – looking forward to uncertainties in the future.

On Tuesday, Nov. 12, during their Professional Development day at High Level Public School, Fort Vermilion School Division teachers and educational assistants learned how to focus on the moment to help themselves and their students find inner peace.

The keynote speaker for the full-day event was Florence Strang, an Educational Psychologist from Newfoundland who has been working in the field for 28 years. Strang does a lot of work in the area of “mindfulness,” a technique people can use to regulate their emotions. She is a best-selling author and motivational speaker as well.

Mindfulness programs help both teachers and students in school settings. The concept of mindfulness revolves around personal awareness and being “in the moment,” and not dwelling on the past or the future.

“When people learn to bring their minds back to the present moment, it gives them clarity of thought and peace of mind,” she said.

FVSD Superintendent Mike McMann said being able to disconnect and find a space of personal peace is more important than ever.

“I don’t believe there has been another time in our lives where people have been more sanctimonious and self-righteous,” he said. “Everybody’s moral judgement seems to be better than yours.

“This is a dangerous culture that exists right now, both politically and within school systems. There is so much in social media feeding into the anxiety and stress of everybody, every day.”

Some of the techniques involved in bringing yourself back into the moment include paying attention to sensory input, and focusing thought on the immediacy of things that can be seen, felt, heard, smelled, or touched. Focusing on breathing or using mental relaxation techniques can also bring the immediate world into focus.

“There are a lot of techniques, and they are all very simple,” said Strang. “It’s been around for thousands of years. Some people think of it as kind of a Buddhist or religious thing, because it is a type of meditation.

“It can be looked at as a spiritual tool, but it is also a very powerful psychology tool.”

Strang wrote a children’s book called “The Mindful Turtle” which teaches a mindfulness technique to young readers. She said the processes for children and adults learning mindfulness techniques are all the same. The only difference is in the language used in each group.

“The same things that work for children to calm anxiety, work for adults,” she said. “The only difference is the words I use to describe it.”

For example, discussions with adults might involve abdominal breathing exercises. For a child, the same technique is referred to as “belly breathing.” Adults might talk about the science behind engaging their sympathetic nervous systems when they are stressed, and using mindfulness exercises to activate their parasympathetic nervous system. In children, the concepts are greatly simplified and can include images to assist in comprehension.

The result of this work, according to Strang, is to create mindful schools where children from a very early age are taught coping skills.

“We don’t teach kids coping skills,” she said. “Unless the child has sever behavioural problems then we might design a course, but every single child needs to learn these skills.”

McMann said it is important not only to be in the moment, but to realize that many factors outside of that moment do not affect them in any meaningful way.

“For me, it’s really about them de-stressing, and for them to realize the higher purpose of doing their jobs and not worrying about all the stuff on the outside,” he said. “And not allowing it to influence what we are doing in our daily lives. It truly doesn’t.

“I really want people coming out of here with clear minds, and thinking for themselves rather than being bullied by people who jump on bandwagons. Whether that’s right or left is irrelevant.”

The focus on mindfulness has been increasingly a focus for schools in the United Kingdom. Strang said the work has resulted in many improvements in student behaviour.

“Children are more attentive,” she said. “They are less aggressive. Their marks are improving. There is a multitude of benefits. The research is emerging now because we have been studying mindfulness since the 1970 and have evidence it actually works through depression, anxiety, and a host of other issues. And there is also new evidence emerging that it is effective for children.”

“You have to breathe anyway,” said Strang. “Why not breathe mindfully? Why not use a breathing exercise that will help calm you?”