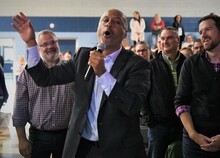 Staff for Fort Vermilion School Division received a lesson in striving for success and how that concept can make them better teachers – thereby improving the lives of students, their own lives, and their communities.

Jimmy Casas – educator, author, speaker, and leadership coach – spoke to more than 500 members of FVSD during a professional development day at High Level Public School on Friday, where he spent the better part of the day re-igniting the passion that drives many educators to their calling by “Living Your Excellence.” The event was illustrated by father-daughter visual practioners Robert Benn and Melanie David.

“We have all this passion, this energy, this enthusiasm, we go into the profession ready to change the world for kids,” Casas said during an interview before his address. “And then something along the journey changes that path for us. For whatever reason, it seems like we don’t walk in with the same energy anymore or the same passion. Its almost like we lose our ‘why.’ Our reason for what we do.

“I want to see if I can get them as fired up and energized as they were when they first started teaching,” he said. “And give some practical ways on how to do that.”

Casas knows a thing or two about passion and excellence in teaching. He served for fourteen years as the principal at Bettendorf High School in Iowa. During his time there, he used his passion to develop a community of leaders and created a culture of excellence and high standards for learning while creating a positive culture for students and staff.

His efforts resulted in Bettendorf HS being named one of the best high schools in the U.S. three times by Newsweek, U.S. News, and World Report. The school was also ranked as a Top AP school in the state of Iowa ten years straight by the Belin-Blank Center for the Talented and Gifted.

“What (Casas) really brings around ‘Culturize’ (a word coined by Casas and the title of one of his books) where its culture through your eyes – and can you really see it?” McMann asked.

“If you can see it, you can reflect on it, and you can move your organization into a greater place than it already is.

“He really fits in with the work we are doing.”

Being a champion for youth -  never giving up on children, and focusing on positive relationships with them.

Carrying the banner – which involves being a positive voice for students, staff, colleagues, and for one another. But it also means creating a positive culture so when people leave the division they will hold it in high regard wherever they go.

Merchants of hope – The final core principle involves the belief that every day is an opportunity to be part of something great.

Casas said to accomplish these four core principles, a positive mindset is needed and the belief that a person can make a difference. It also requires an understanding that no single person can be successful in this endeavour.

“At the end of the day, we’re all responsible for the climate and culture of our schools,” he said. “We can’t put that on one teacher or one principal.

One challenge to all of this work is getting people to see past the exterior issues and focus on improvement internally.

“No one out there is going to solve our problems,” Casa said. “The only people who can solve the problems in our schools and in our divisions is us. “

He noted that all schools everywhere deal with “average” achievement. Yet some schools are deemed more successful than others even though their achievements are basically the same.

According to Casas, the real difference in perception of schools is found in their culture. Schools with negative reputations often lack the “hope and change” in their school culture required to fuel improvement.

The key is being able to see through the eyes of the students when judging the culture of a school. Empathy is a key component, but it can be very difficult to achieve – especially when the lived experience of students is different than that of staff.

“I will never know what it’s like to live on a Reservation,” he said. “But what I can do is use those resources - the people who do live there, if they trust us, we can begin to use their eyes and help us navigate that. And we can use that to help our children.”